Book Review: Everything I Never Told You by Celeste Ng 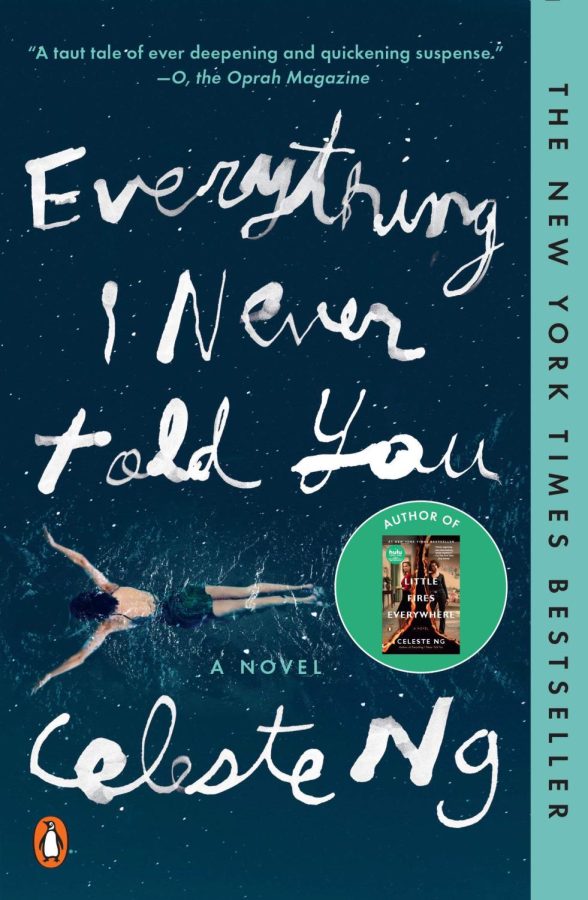 Everything I Never Told You is the debut novel of the famous Celeste Ng, a New York Times best selling author. Ng has received critical acclaim for both of her novels: Little Fires Everywhere and Everything I Never Told You. Her work covers difficult things including racism and family issues. Everything I Never Told You explores these topics with loveable yet infuriating characters. Lydia Lee is the favorite daughter of Marilyn and James, but when she shows up dead in the town’s local lake, the family is quick to fall apart without their guiding light. Beginning the novel, readers learn about Marilyn and James; their families, dreams, and how their meeting starts it all. When Marilyn gets pregnant, James takes a job offer and moves them to Ohio. There, they begin a family which includes their first born son Nath, favorite daughter Lydia, and youngest Hannah. Throughout the book, readers get a glimpse into the Lee family’s lives and how unaccomplished dreams and favoritism pushes their family to the edge.
This book is a great example of what it’s like to be Asian American, especially when you live in predominantly white communities. The novel does a great job at showing the confusion that many mixed race and mixed culture children experience living in the suburbs. Other complex subjects talked about are favoritism, abandonment issues, sibling relationships, and parent-child dynamics. Lydia is the favorite of Marilyn and James, but only because she reflects the dreams they wanted for themselves, not because she’s their child. What makes this point even more dismal is that Lydia only follows what her parents say out of fear of losing her mother.
Ng is a great author that has a lot of new projects including another book and an adaptation of Everything I Never Told You. Recently, she announced the release date for her third novel Our Missing Hearts, coming on October 4, 2022, which will continue Ng’s theme of the Asian American experience. Her second novel, Little Fires Everywhere, has been adapted into a mini series available on Hulu. As of 2020, the rights to Everything I Never Told You have been sold to a production company which announced making the book into a limited TV series. For now, Ng has shown no stop in her writing career and has an even greater future ahead of her.